Did You Know? Facts & Figures About the Holiday of Easter 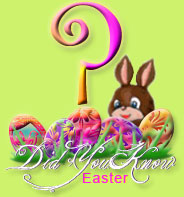 festival of Eastre, a Saxon celebration of spring and fertility? The April holiday included a number of the same springtime rituals and symbols that today feature in Christianity’s celebration of Easter. Included among these are the rabbit and the egg, both ancient Pagan symbols of fertility.

Did you know that thousands of Christian pilgrims converge on Jerusalem every year to celebrate the Holy Week of Easter? On Palm Sunday, pilgrims march through the Holy City, waving palm branches and retracing the steps of Jesus as he made his triumphal entrance into Jerusalem. Then, five days later, pilgrims walk solemnly along the fourteen Stations of the Cross, reenacting Jesus’ procession toward his crucifixion.

Did you know that Ash Wednesday gets its name from the practice of painting ashes on the forehead as a sign of repentance? The movable holiday, which falls anytime between February 4 and March 10, is the first day of the Lenten Period. The ashes are saved from the burning of the previous year’s Palm Sunday palm branches.

Did you know that in Russia, Easter eggs are dyed on Holy Thursday? The traditional method involves boiling the eggs in a mixture of onion peels and silk scraps. Russian Easter eggs are thoughts to possess magic powers, including bringing prosperity and warding off evil spirits.

Did you know that in Greece, children and adults alike play an egg cracking game called tsougrisma on Easter? Players attempt to crack their eggs against their friend’s egg; the last person with an un-cracked egg is considered the lucky one. The Greeks traditionally dye their eggs red, symbolizing the blood and passion of Christ.

Did you know that Easter is celebrated on the first Sunday following the full moon of the vernal equinox? In Western churches, this can occur any Sunday between March 22nd and April 25th. In Orthodox Churches, Easter falls a bit later — between the beginning of April and the beginning of May. The difference in dates is due to varying calculations of when the vernal equinox takes place. In 2009, Easter will be celebrated on Sunday April 12; Orthodox Easter will be celebrated on April 19.

Did you know that the trumpet shape of the Easter Lily is considered symbolic of the heralding of Jesus on his triumphant entry into Jerusalem? Biblical scholars also tell us that lilies may have grown in the Garden of Gethsemane, where Judas betrayed Jesus.

Did you know that 95 percent of the world’s Easter Lilies are produced by just ten growers along the California-Oregon border? Known as the Easter Lily Capital of the World, this area sees more than 15 million lily bulbs planted each year to meet the Easter demand.

Did you now that Palm Sunday is also known as Passion Sunday in many Orthodox churches? Palm Sunday celebrates the triumphant entry of Jesus in Jerusalem, commemorated in many churches by processionals of parishioners who hold palm leaves tied to crosses. The Orthodox church view this as a solemn day of reflection since it portents Jesus’ death just five days later. The term passion is used in Christian parlance to refer to the suffering of Jesus on the Cross.

Did you know that in many Catholic churches, Good Friday services begin at precisely 3 o’clock? This is the time that Jesus is believed to have died on the Cross. Good Friday is a solemn day of prayer, repentance and, in some churches, fasting in commemoration of Jesus’ death. Catholics, Greek and Russian Orthodox, and many Protestants celebrate Good Friday.

Did you know that Americans eat more candy at Easter than at any other holiday besides Halloween? An average of seven billion pounds of candy is consumed over Easter weekend. Sales of Easter candy top nearly $2 billion; in contrast, just over $1 billion of candy is sold for Valentine’s Day.

Did you know that the most popular Easter confection is MarshmallowPeeps? More than 700 million of these chick, bunny and egg-shaped marshmallows are purchased every year. A meager 90 million chocolate bunnies are consumed. At peak production, over four million Marshmallow Peeps can be made each day.

Did you know that eating Easter candy is a relatively modern tradition? The first chocolate eggs, for example, were made in Europe in the 1800s. And Marshmallow Peeps, produced by the Russian-born U.S. confectioner Sam Born, didn’t get their start until the 1950s in the United States.

Did you know that the most popular treat to hide inside an Easter egg is jellybeans? Americans consume more than 16 billion of them at Easter — enough to circle the circumference of the globe three times!

Did you know that over one billion Easter eggs are hunted every year in America? The most popular (or at least the most televised) Easter egg hunt is the one held at the White House. President Hayes hosted the first White House egg hunt in 1878, launching a tradition that has continued to this day. President and First Lady Obama will sponsor their first Easter egg hunt on April 13, 2009. The event — themed as “Let’s Go Play” — is intended to encourage America’s youngsters to lead active, healthy lives. Tickets can be downloaded from the White House website beginning Thursday, March 26, 2009.

Did you know that ham is the most commonly served meat at Easter dinners in America? The tradition has its roots in Northern Europe, where, in the days before refrigeration, hogs were slaughtered in the fall. They were then cured for seven months � and ready to eat just in time for Easter. If you aren’t a fan of the other white meat, turkey and lamb are also popular choices for Easter dinner.