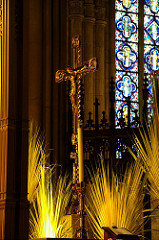 The week prior to Easter is known as Holy Week, for it is filled with a number of holy milestones leading up to the death and resurrection of Jesus. The start of Holy Week is Palm Sunday, the sixth and final Sunday of Lent before Easter Sunday. Palm Sunday, also known as Passion Sunday, celebrates the triumphant entry of Jesus as the Messianic King in Jerusalem.

Just one week before his crucifixion and resurrection, Jesus is believed to have entered Jerusalem, riding on the back of a donkey. He was greeted by enthusiastic crowds, waving palm branches. An historical symbol of triumph and victory, palm branches were used to mark times of great rejoicing, such as the welcoming of a new king.
Also known as Branch Sunday, Palm Sunday is celebrated in many churches by distributing palm leaves tied to crosses to the parishioners. Many churches also feature a processional, in which children play an active role. Since palm branches are not readily available in all climates, some churches substitute boughs of native trees, such as the willow.

In Catholic and Orthodox Churches, the day is typically referred to as Passion Sunday, in anticipation of the impending death (and resurrection) of Jesus. Similar to the religious themes of Good Friday, which commemorates the death of Christ just two days before Easter, Passion Sunday is focused on the suffering and death of Jesus. The mournful reflection can be seen as a symbolic balance to the jubilation of Easter.

When is Palm Sunday?