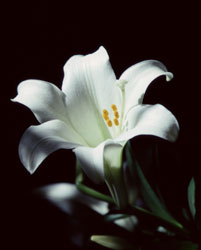 Fills the church with perfumes rare,
As their clouds of incense rise,
Sweetest offerings to the skies.
Stately lilies pure and white
Flooding darkness with their light,
Bloom and sorrow drifts away,
On this holy hallow’d day.
Easter Lilies bending low
in the golden afterglow,
Bear a message from the sod
To the heavenly towers of God.

The Easter Lily, also known by its Latin name Lilium longiflorum, has become the traditional Easter flower. With all the different flowers available in the spring garden, it is this beautiful, white flower, that has come to symbolize the spiritual values of Easter: purity, life and renewel. The flower’s trumpet shape is a reminder of the heralding of Jesus, returning triumphant to Jerusalem.

The History of the Easter Lily

Native to Japan, Easter Lilies were imported to the United States until 1941, when World War II prompted Americans to start growing their own bulbs.

Today, nearly all of the 15 million Easter Lily bulbs grown in America are produced by just ten farms along the California-Oregon border. The bulbs are harvested in the fall, and then shipped to commercial greenhouses in Michigan, California, Pennsylvania and Ohio, where they are planted in time to bloom for Easter.

Easter Lilies are the fourth largest selling potted plant in America, upstaged by the popular Christmas-time poinsettias, mums and azaleas.

According to Biblical scholars, the Easter Lily was found growing in the Garden of Gethsemane where Judas is said to have betrayed Jesus. Legend tells that white lilies miraculously sprung up from the ground where drops of Jesus’ sweat and tears fell during his last hours.

The Easter Lily also has close associations with Jesus’ mother, the Virgin Mary. In early religious paintings, the Archangel Gabriel is pictured extending a branch of white lilies to Mary, symbolizing that she had become the virgin mother to the savior.

Today, many churches use large bouquets of lilies to adorn their alters and crosses during the Easter season.

Taking Care of Your Easter Lily

To keep your Easter Lilies fresh and fragrant for as long as possible, purchase potted plants with flowers at various stages of opening and with abundant, dark green foliage. As the flowers open and mature, pinch off the yellow anthers before the pollen sheds. The yellow pollen will stain the other white flowers. Once a mature flower has started to wither, you may cut it off at the base to better showcase the new buds.

Easter lilies thrive in moderately cool temperatures (no higher than 65 degrees Fahrenheit) and enjoy bright, but indirect natural sunlight. Keep soil moist and well-drained. Avoid over-watering. Remove any decorative wrappings or coverings, which can trap standing water in the pot.

You can expect your potted Easter Lily to bloom for 1-3 weeks around the Easter holiday. Despite its name, the natural bloom for the Easter Lily is actually during the summer. Under controlled greenhouse conditions, the lily is brought to an early bloom in time for Easter. If you want to continue to enjoy your lily for years to come, try planting the bulb and remaining greenery in your garden after the flowering is finished. Subsequent blooms will occur naturally in the summer.