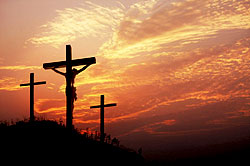 The entire Lenten period is filled with significant holidays, serving as benchmarks along the way to the most important celebration within Christianity: Easter. The buildup reaches a crescendo on the Friday before Easter Sunday, when Good Friday is celebrated.

Commemorating the suffering — known in religious parlance as the passion — of Christ when he died on the cross, Good Friday is a day of fasting, prayer and repentance. Also known as Holy Friday or Black Friday, Good Friday commemorates the sacrificial death of Christ, without which his resurrection — the pinnacle event within Christianity — could not have taken place.

Many Catholic churches begin their worship services at 3 p.m. on Good Friday, which is the time that Jesus is believed to have died. While customs vary by church and by country, many Catholics read or sing parts of St. John’s Gospel, participate in the Veneration of the Cross, and receive communion. Good Friday is also considered a fast day in the Catholic Church, in which parishioners are only allowed to consume one meatless meal and two small snacks.
In Orthodox Churches, different traditions are observed. In Russia, for example, churches prominently display a silver coffin with a cross, surrounded by candles and flowers. Inside the coffin is a shroud painted with an image of Christ. Worshippers crawl on their knees toward the coffin and kiss the shroud.

When is Good Friday?